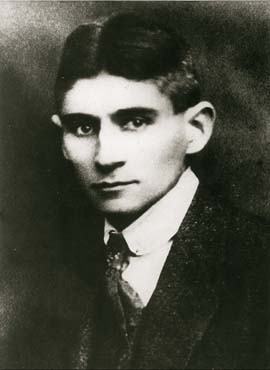 The works of Franz Kafka (1883-1924) seek to pare language and experience down to the elemental. Kafka, a Czech Jew who wrote in German, worked for an insurance company (as did Wallace Stevens on the other side of the Atlantic, but it seems to have done Stevens less harm). He died of tuberculosis in 1924 at the age of 41, generally unknown outside Prague; his fame is due almost entirely to his executor’s refusal to carry out Kafka’s requests to burn all his manuscripts.

Kafka creates black humor out of the disparity between his tightly controlled, self-effacing style and the surreal scenarios he describes: a man turned into a bug, another man arrested but not told what crime he has committed, a penal colony where a machine inscribes people’s crimes onto their skin, an ape who learns to speak but then feels alienated from both the ape and human communities. Although he did write two novels and fragments of a third, his most characteristic work is in shorter forms, including the parable. Kafka’s parables turn on questions of interpretation. He included his parable “Before the Law” in his novel The Trial (1925) and followed it with a debate between two characters about how it should be interpreted. Another parable, “An Imperial Message,” is addressed to the reader: “The emperor, so a parable runs, has sent a message to you, the humble subject.” The parable goes on to tell how far the messenger must travel to reach the reader, and how impossible it is that the message will ever arrive: “Nobody could fight his way through here even with a message from a dead man. But you sit at your window when evening falls and dream it to yourself.” Kafka’s stories often seem like messages from a dead man that are so encoded in indirection that they may never reach their recipient.

The Trial was published in English translation in 1930, and many English writers of the 1930s turned towards forms of parable partly under Kafka’s influence. Kafka’s own works address politics only indirectly, although they frequently feature injustice administered by bureaucrats. For politically inclined writers of the 1930s, however, the parable offered the opportunity to address political concerns in an alternative, fictional universe. Kafka shared with James Joyce a fascination with the status of fiction, but whereas Joyce’s late novels are all-encompassing and overflowing, Kafka’s fictions are pared down and cryptic. Both represent aspects of modernism, its expressionistic affirmation and its ascetic control.[1]