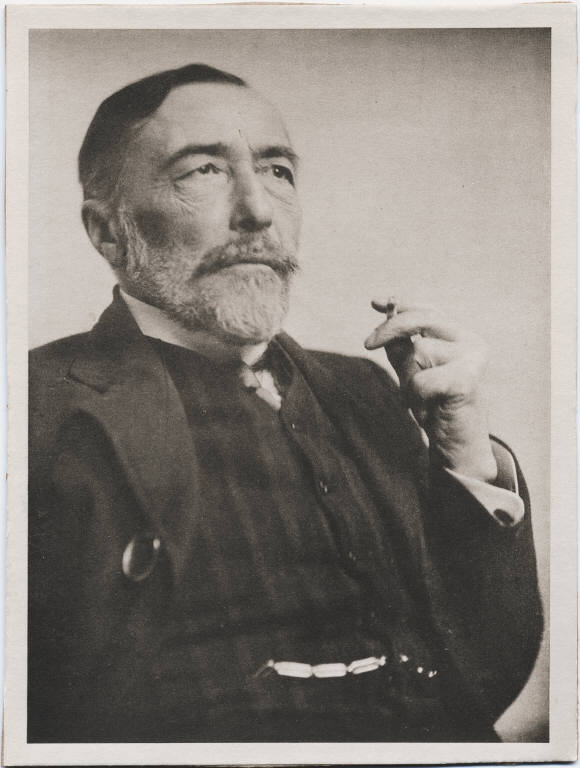 Joseph Conrad (1857-1924), a Polish expatriate born Józef Teodor Konrad Korzeniowski, worked as a sailor on French and British ships before becoming a naturalized British subject in 1886. He developed an elaborate, beautiful English prose style and probed many of the deep questions of modern fiction in his short stories and novels.  His work was by turns adventurous and darkly pessimistic, interested in the traditional virtues of steadfastness and courage while also concerned with the epistemological lacunae that define modern existence and perception.  One of the most noted practitioners of literary impressionism, Conrad offered a fictional rendering of subjective response that had a profound impact on writers like Ford Madox Ford and Virginia Woolf. He wrote that the primary task of the novelist was "to make you see."

Born on December 3, 1857 in the city of Berdychiv in Russian-controlled Ukraine, Conrad was orphaned at the age of eleven; his father had been imprisoned by the Russians for his nationalist political activities, and both parents eventually succumbed to tuberculosis.  In 1874, Conrad journeyed to Marseilles, where he found work on a series of French vessels over the next four years.  In 1878, Conrad attempted suicide; he later joined a British ship that first brought him to Constantinople and then to London for the first time.  He would serve in the British merchant navy for the next 16 years.  At the age of 21, he began learning to speak English, the language that he would so brilliantly use in his writing.  (He had been reading English since a young age).

Conrad's service at sea took him to many foreign ports and cities, including Australia, the Malay states, and the Belgian Congo.  Around 1890, Conrad began fictionalizing his seafaring experiences.  An admirer of Gustave Flaubert, he became friendly with Henry James, H.G. Wells, Ford Madox Ford, and other major writers of the early modernist period. In 1895, he published Almayer’s Folly, a novel set on the coast of Borneo; shortly thereafter, he wrote and published The Nigger of the ‘Narcissus’ (1897), Lord Jim (1900), Youth (1902), Nostromo (1904), and others.  It was not until the commercial success of his 1914 novel Chance, however, that Conrad began to reap real material benefits from his writings.

In Lord Jim, Heart of Darkness, and other stories, Conrad used a fictional sailor and narrator, Marlow, as a framing device.  This technique mediated and complicated stories of imperialist adventure into labyrinthine meditations upon truth and falsehood.  The figure of Marlow helped Conrad foreground issues of narrative unreliability and the complicated relation between subjectivity and epistemology.

The work produced from 1911 until Conrad’s death in 1925, although still well received, has been considered weaker than Conrad’s earlier masterpieces such as Nostromo and Heart of Darkness.  In this period, Conrad wrote less of adventures in foreign lands and more of domestic issues, less of life in the liminal spaces of the ocean and more of firmly grounded civilization.  His later years, however, were not without their triumphs; in particular, The Shadow-Line is a complex contemplation of supernaturalism and the inevitable and painful growth into maturity.

In recent years, Conrad’s work has been at times attacked for its racism (most notably by Chinua Achebe) and at times lauded for its portrayal of imperialism and colonialism.  He remains one of the most complex figures of modernism, capable of spinning entertaining yarns of life at sea that turn out to explore unexpected philosophical depths.  He bequeathed to modernism the sense that life must have an ultimate meaning, but one that can never be made fully explicit.  As Marlow asks in Lord Jim, "Are not our lives too short for that full utterance which through all our stammerings is of course our only and abiding intention?"