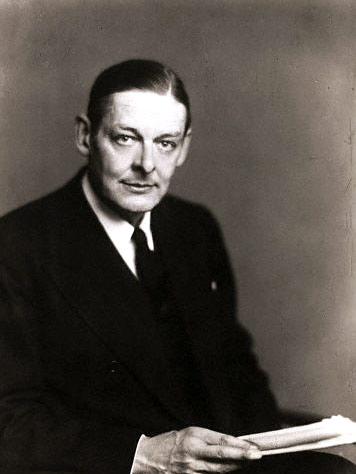 "Tradition and the Individual Talent"

For many readers, T.S. Eliot (1888-1965) is synonymous with modernism.  Everything about his poetry bespeaks high modernism: its use of myth to undergird and order atomized modern experience; its collage-like juxtaposition of different voices, traditions, and discourses; and its focus on form as the carrier of meaning.  His critical prose set the aesthetic standards for the New Criticism, and his journal Criterion was one of the primary arbiters of taste throughout the 1920’s and 1930’s.  Eliot’s wide-ranging but relatively small corpus of work  – the precocious “The Love Song of J. Alfred Prufrock” (1915), the seminal The Waste Land (1922), and the later Four Quartets (1943), which Eliot considered his masterpiece – has made him the primary figure of modernist poetry both for his peers and for subsequent generations.

Thomas Stearns Eliot was born on September 26, 1888 in St. Louis, Missouri to a wealthy Unitarian family with roots in Massachusetts.  Studying first at Smith Academy from 1898 to 1905 and then at Harvard College from 1906 to 1909, Eliot learned Greek, Latin, French, and German, developing philological skills and gaining familiarity with varying philosophical traditions.  While at Harvard, Eliot became interested in French symbolist poetry, finding himself particularly drawn to Rimbaud, Verlaine, and Laforgue.  These poets would prove influential for Ezra Pound as well.

In 1911, Eliot enrolled as a doctoral student at Harvard, reading deeply in Buddhism and learning Sanskrit.  Having studied in Germany and at Oxford, Eliot settled in England after the outbreak of the First World War, working as a teacher and, famously, as a banker.  Eliot’s Anglophilia was lasting: he was a leading figure in the London artistic scene along with Pound, Wyndham Lewis, and others, became a British subject in 1927, and converted to Anglicanism around the same time. Soon afterwards, he encapsulated his views as "classicist in literature, royalist in politics, and Anglo-Catholic in religion."

Eliot had married Vivienne Haigh-Wood in 1915.  The marriage was not successful: the two separated in 1933 and Eliot eventually committed Vivienne (still legally his wife) to a mental hospital in 1938.  In 1957, Eliot married Esmé Valerie Fletcher, his former secretary at Faber and Faber.  The two were happy together until Eliot’s death in 1965; his poem “A Dedication to My Wife” is a rare public declaration of the deep affection he felt for his second wife.

Eliot’s first truly mature piece of verse, “The Love Song of J. Alfred Prufrock,” written mostly when Eliot was only twenty-two, was pioneering in its use of interior monologue, in its fragmented structure, and in its startling figurative language (“Let us go then, you and I, / When the evening is spread out against the sky / Like a patient etherised upon a table”).  It amazed Ezra Pound, three years Eliot's senior, by its modernity, which Eliot had achieved without any direct contact with avant-garde movements.  Pound, who met Eliot during the second month of the war, arranged to have "Prufrock" published in Poetry in June of 1915. With the publication of the volume Prufrock and Other Observations by The Egoist Press in 1917, Eliot was heralded as the most important of modern poets. He also became the most influential critical voice of the movement, arguing for example that, in modern civilization, "the poet must become more and more comprehensive, more allusive, more indirect, in order to force, to dislocate if necessary, language to his meaning."

In 1922, his status was confirmed by the publication of The Waste Land.  Appearing as it did in the same year as James Joyce’s Ulysses, the 434-line poem helped mark 1922 as a magical year in high modernism.  Allusive, musical, and formally and linguistically complex, The Waste Land both diagnosed the chaos of modernity and provided an example of how art could order this experience; it expressed a widespread feeling of exhaustion and cultural crisis in the aftermath of the First World War.  Like Ulysses, it mimicked and mined the different voices of urban life to create a bewildering and complex polyphony, and like Joyce’s novel it used recursive patterning and mythic parallels to provide some semblance of organic harmony.

Eliot continued to publish poetry, drama, and critical prose for the next four decades.  His 1925 The Hollow Men was a despairing work symptomatic of a generation scarred by war, but also pointed towards his later conversion, while the essay “Tradition and the Individual Talent” (1919) discusses the inextricable link between present and past poetry and contains Eliot’s famous formulation of the impersonal nature of poetic creation.  After Eliot’s conversion to Anglicanism, his poetry took on a more theological bent, as he wrestled with issues of temporality and eternity, poetry as inevitable failure and as ungraspable ideal, in Four Quartets.

Having written one expressionist-influenced play, Sweeney Agonistes, in 1926-1927 (first performed in 1933), Eliot turned after his conversion to a very different sort of ritualized drama, the pageant play.  His Murder in the Cathedral,first performed at the Chapter House of Catnerbury Cathedral in 1935, tells the story of the martyrdom of Thomas a Becket, Achrbishop of Canterbury.  Eliot envisioned drama as the "ideal medium" for verse and "the most direct means of social 'usefulness' for poetry."  His later plays, however, became increasingly indistinguishable from the commercial theater whose conventions they were intended to recast.

As editor at Faber and Faber, Eliot promoted the work of many younger writers, including W.H. Auden and Djuna Barnes, although his conservative politics, expressed most bizarrely in After Strange Gods(1934), were at odds with the views of leading younger writers of the 1930's. After the Second World War, Eliot, now an influential literary editor, left lyric poetry behind in order to write increasingly mainstream drama. He received the Nobel Prize for Literature in 1948.