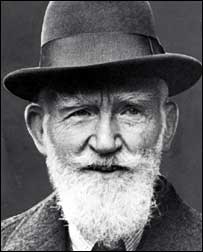 The Irish-born playwright and critic George Bernard Shaw (1856-1950), the leading playwright of modern Britain, wrote frankly and satirically on political and social topics such as class, war, feminism, and the Salvation Army, in plays such as Arms and the Man (1894), Major Barbara (1905), and, most famously, Pygmalion (1913). His work introduced the theater of ideas to the English stage; where Ibsen turned melodrama into naturalism, Shaw parodied melodrama in order to develop an intellectual comedy of manners.

Like Wilde, Shaw took hypocrisy as one of his major themes. His best works combined Wilde’s wit and Ibsen’s seriousness of purpose, seeking always to reveal the bogus values of various segments of English society. Shaw left Ireland for England as a young man in 1876 and, like many other modern dramatists, wrote novels and criticism before turning to the theater. The director of the Independent Theater in London, J.T. Grein, who had produced Ibsen’s Ghosts and Zola’s Therese Raquin (1867), encouraged Shaw to start writing plays when he was almost forty.

His best early plays treat contemporary social issues humorously through the satirical use of love plots and melodrama. Although their content challenges the ruling ideologies of the late Victorian period, their form is often, as Shaw put it, “pleasant.” For example, in Arms and the Man, set during a way between Bulgaria and Serbia, a Bulgarian girl falls in love with a cowardly Swiss mercenary, “her chocolate cream soldier,” who carries chocolate instead of ammunition and conveniently inherits a fortune during the denouement. The mercenary’s cowardice and straight talk about war do little to undermine the audience’s pleasure at the well-made plot. Similarly, in Major Barbara (1905) the conflict between the idealism of the inefficient charity and the realism of the benevolent arms manufacturer is resolved by a plot twist out of Wilde that draws on and at the same time parodies the well-made play.

After the turn of the century, Shaw increasingly built his still rather conventional forms around a conflict of ideas. He frequently attached long prefaces to the printed version of his plays, which were often published before they had been performed; he also took to an extreme the modern tendency to print long narrative stage directions, by which the playwright tries to indicate how the play should be acted.

Compared with the work of the German expressionists or the French surrealists, Shaw’s major work seems very traditional. The two most important examples of Shaw’s more experimental theater are Man and Superman (1903) and Heartbreak House (1919).  Shaw, who was a leader of the socialist Fabian society, was also an outspoken pacifist and critic of World War I, most notably in Common Sense about the War (1914). After the war, Shaw attempted some rather grandiose experiments in representing world history on the stage, including Back to Methuselah (1921) and St. Joan (1923), a theme taken up again by Brecht in his St. Joan of the Stockyards (1932). The plays tended to become more preachy and less dramatically compelling, but Shaw remained the most important modern British dramatist of his time and defined a uniquely English form of modern drama. He won the Nobel Prize for Literature in 1925.[1]