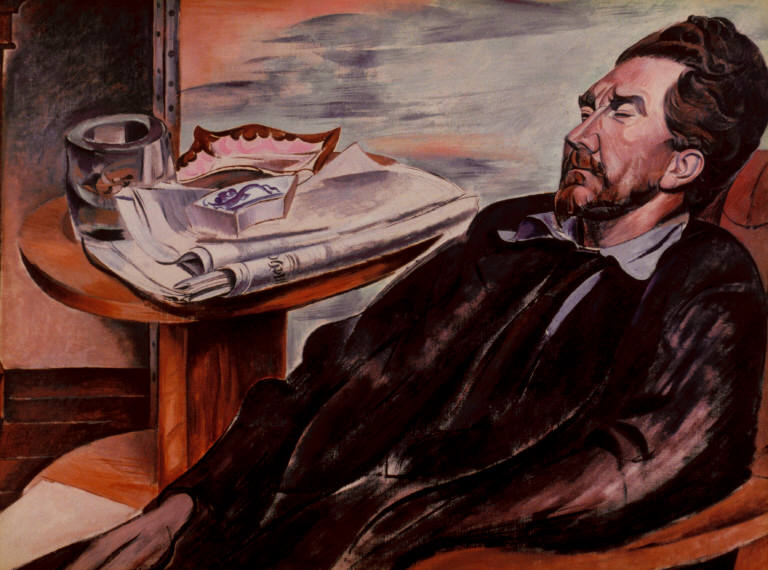 "In a Station of the Metro"

Critic, poet, impresario, and propagandist, Ezra Pound (1885-1972) was one of the shaping forces of modernism, with connections to the era’s most influential writers of prose and poetry.  In championing the liberatory effects of free verse and in skillfully practicing the techniques of collage and allusion, Pound placed a value on novelty and formal experimentation that helps define what we see as the avant-garde to this day.

Pound was born in Hailey, Idaho in 1885 and raised in Wyncote, Pennsylvania.  He studied Greek and Latin languages at Cheltenham before enrolling at the University of Pennsylvania, where he studied languages for two years before finishing his studies at Hamilton College.  Pound then worked as a lecturer in romance languages at Wabash College in Indiana, but he was fired for sharing his bed with an actress (Pound claimed that he had slept on the floor).  He traveled throughout Europe in 1908, visiting Italy, Spain, and England.  During this time, he became interested in Chinese and Japanese poetry, an interest that would last throughout his creative life and help marshal his disparate interests into a disciplined aesthetic. His 1909 collection of poems, Personae, showed his deep engagement with both traditional lyrical forms, like the dramatic monologue, and radically new forms of expression.

After his travels in Europe, Pound arrived in London, determined to transform the literary scene there. Pound’s importance to the development of modernism lies not only in his own work but in his influence on the other major writers of the period, whom he cultivated and promoted in American little magazines like Poetry (of which he was the London correspondent) and The Egoist (of which he was the poetry editor). He befriended William Butler Yeats, who was twenty years his senior, and encouraged Yeats’s turn away from romantic and symbolist poetic diction and towards poetic precision and colloquial language. Later, Pound publicized T.S. Eliot’s poetry and edited the manuscripts of The Waste Land (1922), which Eliot dedicated to him as “il miglior fabbro,” the better or best craftsman. He also worked to promote James Joyce’s writing, and, although Pound’s poetry is less often read than that of Yeats or Eliot, he was arguably the most influential poet in establishing the canon of modern poetry and in articulating its aims.

In imitation of French avant-garde movements, Pound invented the term “Imagisme” to help publicize the poetry of the American poet H.D. (Hilda Doolittle), a friend from his teen-aged years to whom he had once been engaged. Pound stated the three tenets of imagism in 1913:

1. Direct treatment of the ‘thing,’ whether subjective or objective.
2. To use absolutely no word that does not contribute to the presentation.
3. As regarding rhythm: to compose in the sequence of the musical phrase, not the sequence of a metronome.

Pound’s emphasis on “direct treatment” suggests the influence of painting as a model. His desire to avoid unnecessary words and championing of free verse share something of symbolism’s aspiration towards pure poetry, although Pound believed that he was breaking away from symbolism by rejecting its emotionalism. His reference to “musical phrasing” recalls Walter Pater’s aestheticist dictum, in The Renaissance, that “all art constantly aspires towards the condition of music”; the directness of the imagist representation of experience also echoes Pater. Pound's own most famous Imagist poem is "In a Station of the Metro" (1911). In 1914, he edited Des Imagistes, an anthology that included work by Pound himself, William Carlos Williams, James Joyce, and others.

Although relatively short-lived, Imagism played an important role in introducing modernist sensibilities to English-langauge poetry. The American Amy Lowell joined the Imagists, and eventually took over the movement, publishing three further Imagist anthologies during the First World War. Lowell's popularity and her attraction to more traditional verse forms alienated Pound, who felt that the movement had lots its experimental edge and become feminized; he rechristened it "Amygism."

Pound now joined forces with the Canadian-born painter Wyndham Lewis and a group of other artistic radicals, based at the Rebel Art Centre. He coined the term Vorticism to describe Lewis’s art, transforming his earlier imagism by adding a new emphasis on movement: “The image is not an idea. It is a radiant node or cluster; it is what I can, and must perforce, call a VORTEX, from which, and through which, and into which, ideas are constantly rushing.” Pound and Lewis collaborated on the first issue of the journal BLAST, published less than a month before the outbreak of the first world war.

Between 1913 and 1916, Pound and Yeats shared a stone cottage in Sussex, where they studied occult lore, Chinese poetry, and Japanese Noh drama. Pound served as Yeats’s secretary, and Yeats praised the younger man for helping him to “eliminate the abstract” from his poetry, although Pound learned much from Yeats too about how to write modern poetry.

During the early years of his collaboration with Yeats, Pound was still actively promoting Imagism and Vorticism. Even while he remained the impresario of the English avant-garde, however, Pound was preparing to undertake a more far-reaching revision of the English poetic tradition. As in his Imagist manifesto, Pound maintained his emphasis on the need for poems to use the language and rhythms of speech, rather than artificial poetic conventions. Although he rejected conventional poetic diction and meter, Pound was steeped in literary tradition. Early in his career, he wrote that “No good poetry is ever written in a manner twenty years old, for to write in such a manner shows conclusively that the writer thinks from books, convention and cliché, and not from life, yet a man feeling the divorce of life and his art may naturally try to resurrect a forgotten mode if he finds in that mode some leaven, or if he think he sees in it some element lacking in contemporary art which might unite that art again to its sustenance, life.”

Like other modernists, Pound here uses the antique—the forgotten mode—as a corrective to the sham traditions of the recent past. His major poem of the war years, the “Homage to Sextus Propertius” (1917), translates and adapts passages from the writings of a difficult poet of the early Roman Empire into a modern American voice.

Pound and Yeats between them made a number of literary “discoveries” of authors living in relative obscurity whom they helped to catapult to leading positions in the modernist movement. Before the war, Yeats had championed the poetry of the Indian nationalist and mystic Rabindrinath Tagore and had assisted him in translating his poems from Bengali to English; Pound published Tagore’s work in Poetry. With the help of Yeats and Pound, Tagore rapidly developed a huge European following and won the Nobel Prize in 1913, leading Pound to react against this popularity and include him among the “Blasted” in the 1914 issue of BLAST. Pound also took up the cause of Robert Frost, eleven years older than himself, but Frost rebuffed his efforts. Pound more successfully befriended two writers who later, with his help, would earn reputations as the central figures of English-language modernism, T. S. Eliot and James Joyce.

In 1917, Pound became the London editor of The Little Review, largely determining the content of this most influential of modernist publications and securing a regular place of publication for Joyce, Eliot, and Lewis in its pages.  In 1920, he moved away from London to Paris.  In 1924, he moved yet again, this time to Italy, where he would live for the next twenty years.  Living in London, Paris, and Italy, Pound wrote some of the most challenging, beautiful poetry of the era, including his at times ribald, at times doleful “Homage to Sextus Propertius” (1919) and one of his true masterpieces, “Hugh Selwyn Mauberley” (1920).

Pound’s epic, The Cantos, begun during the First World War but still incomplete at his death in 1972, shares some of the features of The Waste Land, but it shores its fragments on a much greater scale. (Canto VIII begins with a reference to Eliot: “These fragments you have shored (shelved).”) It makes use of quotation and allusion to other poets in a method that somewhat resembles cubist collage, but at epic length. Pound combines borrowings from Homer, the Provençal poet Arnaut Daniel, the history of the Italian Renaissance, President John Adams, Robert Browning, and Chinese poetry (as interpreted by the scholar Ernest Fenollosa) with offbeat economic and social theories to relate what he calls “the tale of the tribe,” that is, the intellectual life of the human race, exemplified in certain key historical or literary moments. The result, though tainted by Pound’s anti-semitism and adoration of Mussolini, is, like The Waste Land or Ulysses, a major expression of the modernist ambition to bring the whole of world history to bear on the understanding of modern life and the remaking of poetic tradition. Pound called it an epic, “a poem including history,” and it is also a poem shaped by history.

While living in Italy, Pound met Benito Mussolini and became involved with Italian fascist politics. He spent much of the Second World War propagandizing for the fascists through radio broadcasts. After the war, American authorities found him mentally unfit to stand trial for treason and confined him for twelve years to St. Elizabeths Hospital for the Criminally Insane in Washington, D.C. In 1949, the Fellows in American Letters of the Library of Congress, a group of distinguished poets, awarded the first Bollingen Prize in poetry to Pound for the Pisan Cantos, written during his internment after the war, partly in defense of his wartime activities. Pound’s anti-semitic propaganda on behalf of Mussolini during the war was well known, and he became a target of controversy; many leading intellectuals thought that, despite the services to modern poetry for which the judges sought to honor him, Pound was not an acceptable choice. The distinguished critic Irving Howe wrote: “by virtue of his public record and utterances, [Pound] is beyond the bounds of our intellectual life.”  After his release from St. Elizabeths, Pound moved back to Italy, living there until his death in 1972.

Pound’s contributions to modernism are varied, from his early advocacy of the publication of Joyce’s prose to his extensive editing and paring of Eliot’s The Waste Land to his own manifestos and aesthetic pronouncements.  Perhaps his most impressive achievement, however, is The Cantos, the epic poem that he worked on for the last fifty years of his life.  Partially modeling this great work on the prior creations of Dante and Browning, Pound explored the spiritual quest of the poet in modern, apparently debased times.  It stands, along with its creator, as one of the great symbols of modernist achievement.