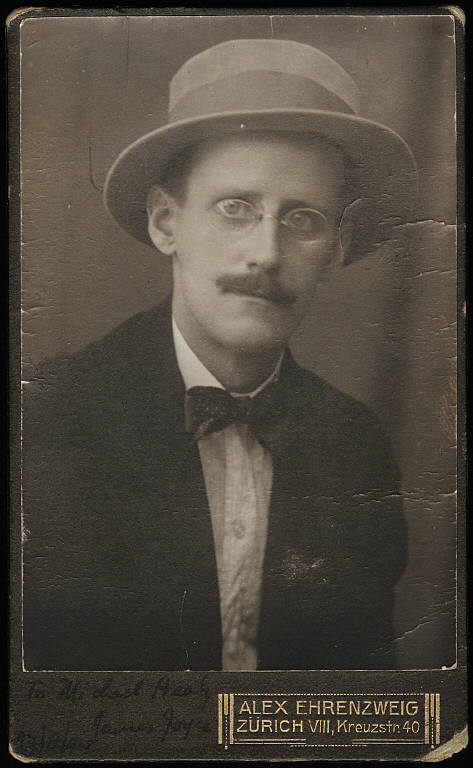 Introductions to Episodes of Ulysses

"The Oxen of the Sun"

Other Essays on Ulysses

Essays on other works by Joyce

A Portrait of the Artist as a Young Man

"I Hear an Army" (in Chamber Music)

James Joyce (1882-1941) is a colossus of modernist fiction.  He has been derided as obscene and immature and lauded as an erudite humanist; some have deemed his prose impenetrable, too concerned with artifice and verbal gamesmanship, while others have described his writing as life-affirming and always attuned to the music of language.  Joyce combined stream-of-consciousness, absurdist drama, mythical parallelism, and other techniques in a formal mélange that has had a profound impact on other modernists and future generations of novelists.

Joyce was born in the Dublin suburbs in 1882 to a Roman Catholic family.  His father, John Joyce, a renowned drinker, singer, and storyteller who was on a steady social decline throughout his son’s childhood, would serve as a model for Simon Dedalus in A Portrait of the Artist as a Young Man and Ulysses.  As a young student, Joyce attended first Clongowes Wood College and then Belvedere College, both Jesuit schools.  At the age of 16, Joyce rejected Catholicism; the symbols, rituals, history, and theology of the Church, however, would remain important sources for his later fiction.

Starting in 1898, Joyce attended University College Dublin, where he began dabbling in lyric poetry and wrote a review of Ibsen’s When We Dead Awaken that received an appreciative response from the playwright himself.  After graduating in 1902, Joyce left for Paris to study medicine; he soon found this career unpalatable, however, and instead embarked upon a literary career.  In 1903, Joyce returned to Dublin to see his dying mother, refusing to kneel at her bedside, a decision that would haunt Joyce’s future fictional avatar Stephen Dedalus.

On June 16, 1904, Joyce went on his first date with his future wife, Nora Barnacle; the date would later be immortalized as Bloomsday, on which the action of Ulyssesis set.  Shortly thereafter, Joyce and Nora moved away from Ireland, living in Zurich, Trieste, Rome, and Paris.  Embracing the life of the exile, Joyce would never live in Dublin again.

Joyce’s first published book, Dubliners(1914), consisting of stories he had written over the previous decade, was a naturalistic look at what Joyce called the spiritual paralysis of Dublin. Although he had completed most of the book by 1905, most prospective publishers feared prosecution for obscenity and libel, since the book contained the word "bloody" and an unflattering reference to King Edward VII.  When it was finally published, no prosecution followed, but it would not be Joyce's last experience of censorship.

During the decade it took to get Dubliners published, Joyce had been working on an autobiographical novel that eventually became A Portrait of the Artist as a Young Man. Ezra Pound, who had learned about Joyce's work from William Butler Yeats, took up Joyce's cause, publishing oen of his poems in his anthology Des Imagistes(1914), and arranging gor the publication of Portrait in The Egoist, beginning on Feruary 2, 1914 (Joyce's thirty-second birthday). In this novel, the free indirect discourse of Dubliners gave way to more daring formal experimentation, such as the mimicking of an infant’s language in the novel’s opening pages and the representation of a young aesthete’s mind at work throughout.

Joyce had been scraping by as an English teacher in Trieste and moved to neutral Zurich after the outbreak of war. Pound and Yeats convinced the Royal Literary Fund and the Civil List to make grants to Joyce that permitted him to spend the war years working on Ulysses, seriealized (again thanks to Pound's intervention) in the Little Review from 1918 onwards until censorship prevented its continuation in 1920.  The novel was published in book form by Sylvia Beach on Joyce's fortieth birthday, February 2, 1922; it remained unavailable in Britain, Ireland, and the United States for over a decade because of continuing censorship.

All of the formal devices of Joyce's earlier work were put into the shadows by the pyrotechnics of Joyce’s last two novels, Ulysses (1922) and Finnegans Wake (1939). T.S. Eliot wrote of Ulysses, "It is a book to which we are all indebted and from which none of us can escape." Ulysses is often cited as the exemplary instance of the stream of consciousness in modernist fiction.  The chapters in which this technique appears, however, occupy less than a quarter of the novel.  Joyce wrote chapters parodying the stylistic evolution of English literature and the clichés of pulp magazines; in another section, he combined the format of the Catholic Catechism with a scientific lexicon to provide the broadest possible interpretation of the events of June 16, 1904.

Finnegans Wake, a dizzying web of allusions and languages, is perhaps even bolder in its technical innovations.  Joyce considered this novel to be his masterpiece.  One of the masterpieces of twentieth-century literature, Finnegans Wake possesses the characteristics that have made Joyce one of the most maddening and rewarding of modernists: a seriocomic engagement with myth and history; a labyrinthine complexity and recursive form; and a sense of humor that provokes laughter despite obscurity. The novel was published in May 1939, shortly before the start of the Second World War.  Joyce died two years later, as a result of surgery for an ulcer.