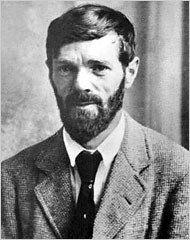 A prolific poet, painter, and essayist, D.H. Lawrence (1885-1930) is today best known for his novels, which remain popular with a general reading public in part because he maintained conventional syntax and grammar and fairly straightforward plots, such as the chronicle of several generations in the life of a family. Thematically, however, and particularly in their portrayals of sexuality, his novels challenged the traditions of English fiction. Like E.M. Forster, he concerned himself with the class barriers that divided English society.

The son of a miner and a school-teacher, Lawrence felt himself both attracted and repelled by his father’s working-class way of life. Many of his heroes are the sons of the working classes who break away from their apparently immutable fates and ally themselves to artistic middle- or upper-class women, as Lawrence did to Frieda von Richthofen, the German-born wife of one of his professors at Nottingham University College. Lawrence’s treatment of the life of the working classes continues themes from naturalism, but his approach to these themes is less distanced and analytical than that of Emile Zola or Arnold Bennett. His primitivism arises in part from his effort to engulf himself in the passions that Zola preferred to study from a clinical point of view.

Lawrence developed a number of theories about the flaws of modern civilization that helped to justify his literary endeavors. He continually sought the means to overcome the alienation typical of industrialized society through a fusion of man with woman, man with man, and man with nature. Lawrence shared Forster’s interest in relationships between men, although he strongly disapproved of homosexuality. His theory of blood-brotherhood emphasized the regenerative powers of an authentic male friendship, and valued physical but non-sexual intimacy between men highly, as in scenes of wrestling in Women in Love (1916) and massage in Aaron’s Rod (1922).

Having read Nietzsche and Freud and encountered the work of the German expressionists, Lawrence became convinced that sexual repression was causing the deterioration of English civilization. In particular, he blamed Christianity for its repressive division of the self into spirit and flesh and its privileging of the spirit. He found in Freud’s Oedipal theory material for the development of his own views of the mother-son relationship, which he explored in his autobiographical novel Sons and Lovers (1913). Although Lawrence rejected many of the formal experiments typical of modern art as tending towards effete aestheticism, he shared the expressionist ideal of the work of art springing from the depths of its creator’s unconscious life. His efforts to depict sexuality honestly made him a leading practitioner of modern fiction. His fourth novel, The Rainbow (1915) became a target of the National Purity League. The novel was attacked for its descriptions (by today’s standards, rather restrained) of its heroine’s sexual relations with lovers of both sexes. However, Lawrence may in fact have been targeted because of his known opposition to the first world war and his reputation as a “pro-German,” due largely to his relationship with Frieda, whom by this time he had married.[1] Court proceedings were taken against the publisher, Methuen, not the author, and Methuen chose not to defend the novel. Much of the first edition was destroyed, and Lawrence could not find a British publisher for the sequel, Women in Love.

After the suppression of The Rainbow, Lawrence became embittered at English provincialism and spent much of his life traveling, especially in Italy, Australia, and Mexico. He found in native American, Australian, and Mexican cultures inspiration for his fantasies of authoritarian leadership. In The Plumed Serpent (1926), a Mexican revolutionary attempts to revive the cult of the Aztec god Quetzalcoatl. The cult of the leader also dominates Aaron’s Rod (1922), set in pre-fascist Italy, and Kangaroo(1923), set in Australia. The key to transcending modern bourgeois sterility lay, for Lawrence, in the encounter with the exotic, the primitive, or the authentic life of the working classes.

When Lawrence died of tuberculosis at the age of 45, in 1930, he seemed a martyr to the forces of censorship and repression that had sent him into exile. Like Forster’s Maurice, Lawrence’s most controversial novel, Lady Chatterley’s Lover, could not be published as written in England during his lifetime. Privately printed in Italy in 1928, the novel revolves like Maurice around the relationship between an upper-class figure and a game-keeper. Here, the upper-class lover is a woman, Lady Chatterley, married to an effete aristocrat who has been made impotent by war wounds. Lawrence described her sexual relations with the game-keeper Mellors in explicit detail. When Penguin finally published an unexpurgated version in 1960, the firm was charged with obscenity but acquitted in a famous trial, in which E. M. Forster appeared as a witness for the defense. This victory finally led to the abandonment of British attempts to censor major literary works, although censorship of the stage persisted for several years. The trial of Lady Chatterley opened the way for the more sexually explicit literature of the 1960s and afterwards.[2]