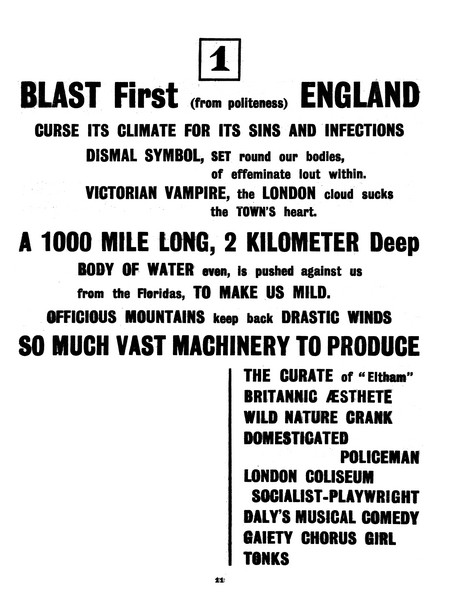 The first page of the Vorticist Manifesto, from the first installment of BLAST (click to enlarge). Source: the Modernist Journals Project at Brown University. http://dl.lib.brown.edu:8081/exist/mjp/index.xml
Ezra Pound collaborated with Wyndham Lewis on the first issue of the journal BLAST, published less than a month before the outbreak of the first world war (July 1914). The volume contained a manifesto, a few of Pound’s less successful poems, reproductions of vorticist paintings, the first draft of Ford Madox Ford’s The Good Soldier, a translation of Kandinsky’s “On the Spiritual in Art,” and lists of famous people or institutions that the vorticists wished to “blast” (Galsworthy, Sydney Webb, and the Post Office) or to “bless” (James Joyce, the Pope, and the Salvation Army). Lewis’s prose-poem The Enemy of the Stars, published in BLAST, used fragmented syntax, violent imagery, and sudden shifts in perspective to attempt something like the abstraction of modern art in a literary form. The vorticists’ manifesto, “Long Live the Vortex!”, demonstrated somewhat more self-ironic humor than such European models as the manifestoes of Marinetti or Apollinaire’s “Futurist Anti-Tradition.”

BLAST participated in the development of the avant-garde discussed by the critic Hugh Kenner: “English poetry was being freed from painting, English music from ‘literature,’ painting from anecdote, sculpture from sentiment.[1] Each art was starting forth sharp and distinct, all simultaneously released from the mimetic.” BLAST did not, however, fulfill its promise as a quarterly journal of the English avant-garde. The war broke out, and only one further issue was ever published.[2]