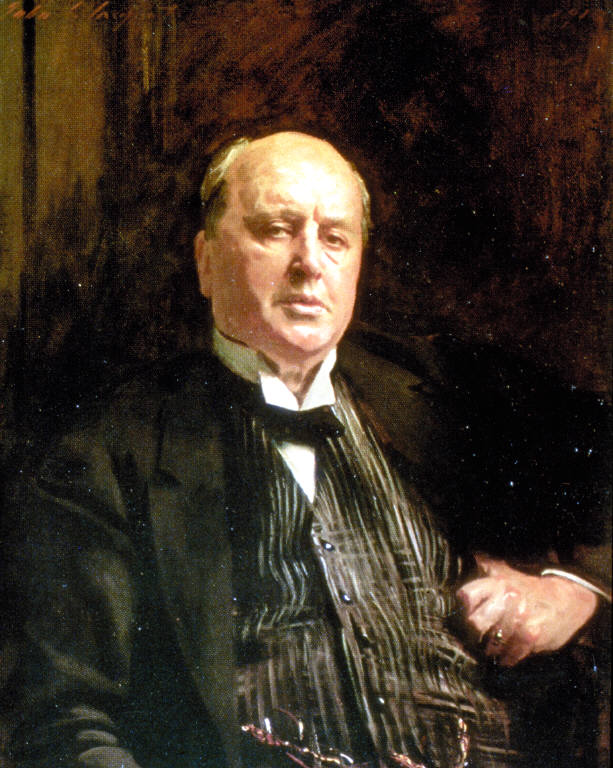 Henry James was a fierce defender of the novelistic tradition and of formal complexity.  A master of focalization, he showed in works like What Maisie Knew (1897) and The Golden Bowl (1904) the centrality of perspective to a novel’s construction.  His works explored the encounter between Americans and Europeans, between the innocent and the worldly, between individual, fluid consciousness and the obtuseness of others and the outside world.  In his preface to The Golden Bowl, James wrote that the writing and reading of fiction was an ethical project, that “the effort really to see and really to represent is no idle business in face of the constant force that makes for muddlement.”  Moving from the Victorian melodrama of The American(1877) to the modernist impressionism of The Wings of the Dove (1902), James’s entire career was defined by the seriousness with which he took the art of the novel.

James was born on April 15, 1843 in New York City into a family of wealth and intellect.  His father, Henry James, Sr., was a leading theologian of the time and friends with Emerson and Thoreau; his older brother, William, would become an important figure in psychology and philosophy; and his sister, Alice, would later become famous as a diarist.  Henry moved throughout his childhood, as the young cosmopolite studied in Geneva, Paris, and Bonn, among other cities.  He briefly attended Harvard Law School, but decided upon a life of letters instead of the law.

In 1871, James published his first of twenty novels, Watch and Ward.  For the next five years, James traveled throughout Europe, working as a contributor for the Nation and Atlantic Monthly, rarely living in the United States.  In 1875, Roderick Hudson, a Bildungsroman that contains hints of repressed homosexual longing, appeared serially in the Atlantic.  The next year, James moved to Europe.  He lived first in Rome, then in Paris, and finally settled in England, where he would live until his death in 1916.

James’s early novels had a Transatlantic flavor: The American, Daisy Miller(1879), andThe Portrait of a Lady (1881) all featured young, naïve Americans traveling to Europe, where an encounter with corruption and cynicism forced the reconsideration of their own selves and ethical values.  Showing James’s lasting interest in Balzac and Dickens, these early novels are exemplars of the realist tradition.  James tried his hand at drama, primarily from 1890 to 1895, but he failed spectacularly.  Critics like Leon Edel have pointed towards the failure of works like The Tragic Muse(1890) as central to James’s late style.

As James continued writing, his works became more and more opaque.  “Muddlement,” the epistemological uncertainty involved in consciousness and the negotiation of everyday social relations, caused a formal change in his novels.  James’s prose became oblique, a puzzle to be decoded rather than a mirror clearly and simply reflecting reality.  The Golden Bowlis a perfect model of this narrative indirectness.  The novel treats the complex and adulterous relations between Maggie Verver, her husband Prince Amerigo, and his former mistress Charlotte Stant.  The atmosphere is almost claustrophobic in nature.  James relentlessly tracks the thoughts of first Amerigo and then Maggie, refusing to give the reader information that his characters are not privy to.  One feels trapped within the obsessive minds and machinations of the characters.

James traveled to the United States in 1904-1905 for a lecture tour, but came back to England shortly thereafter.  In 1915, he became a British citizen in order to protest the United States’ isolationism in the face of World War I.  He died in London on February 28, 1916.  Unlike T.S. Eliot, another Anglophile, expatriate American modernist, James’s remains were returned to the United States.