Vanessa Bell’s “Studland Beach,” painted around 1912, shows the achievement of British post-impressionism in its arrangement of planes of color and balancing of two groups of figures seen only from behind. The painting emphasizes what Bell's husband Clive called “significant form.”[1] The figures in the left foreground of the canvas seem to be watching those in the upper right corner, calling attention to the act of perception involved in painting. All the figures face away from the viewer, oriented like the painting itself towards the sea. 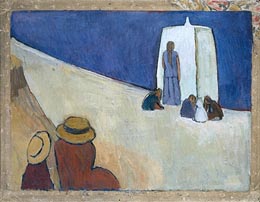 As the art historian Lisa Tickner has shown, Vanessa’s paintings served as an inspiration to her sister, Virginia Woolf, who would write, in To the Lighthouse (1927), of the artist’s struggle to fulfill her vision in terms of the relation between masses: “It was a question, she remembered, how to connect this mass on the right hand with that on the left. She might do it by bringing the line of the branch across so; or break the vacancy in the foreground by an object (James perhaps) so. But the danger was that by doing that the unity of the whole might be broken.”[2] In contrast with the frenetic energy of a Vorticist painting like Wyndham Lewis’s Kermesse (painted in the same year), Bell’s painting represents a scene of calm, in which nature and the family group are held together by compositional form.[3]